You can see how Jim cut and fit the molding and beadboard around our medicine cabinet. He did a wonderful job making it all look seamless.

But I’m getting ahead of myself. Before Jim did all that wonderful work on the molding and wainscot, I had to find a new medicine cabinet. I just wasn’t finding anything in the budget that came close to what I had in mind. You see, I had seen all of your wonderful custom medicine cabinets, and I really, really wanted something as nice as all of yours.

Dreams of all your beautiful bathrooms were floating through my head when we were taking everything out of the bathroom, and that’s when I started to really look at the cabinet we had over the toilet. It was constructed well. It was a nice size. If we added another shelf it would hold all our things. I could probably find a framed mirror that would cover the whole length of it to use as a door…hmmm… That could work… A nice big medicine cabinet with one nice big mirror instead of three skinny doors and mirrors.

Unfortunately, finding a standard mirror the right size was next to impossible! We’d have to do something custom to make it work.

I shared the idea with Jim, and let’s just say he wasn’t terribly enthusiastic about it at first. He couldn’t see my vision for it. He did, however, like the idea of saving money and of making the door himself. He likes doing that kind of stuff, and adding the extra shelf was simple enough.

Once he was on board with the idea, he and I did butt heads a little on the design.  I wanted one single door with a large mirror. He said that size door was too big for our bathroom, it would get in the way, and hit the towel ring. I did not want two doors, because then there would be a frame going down the middle between the two doors and both mirrors would be so small they would basically be unusable. However, I could see his point about opening out too far into the room.

Then I found a medicine cabinet online, that became my inspiration. I didn’t care for the Greek key detail, but that was inconsequential. The design idea was what was important. If we had two doors that weren’t the same size, that would make both of us happy. I’d have the large mirror I dreamed of, and Jim would have the two doors that were more practical. In my mind that would definitely work. I showed the picture to Jim, and again, he wasn’t terribly enthusiastic, because it meant more complex measuring to make it work. But he agreed it was a good compromise.

Again we butted heads on the dimensions of the doors, but needless to say, we finally agreed. He made it all work, and he did a fantastic job. We actually worked pretty well as a team on this project, although Jim did hardest part of building the doors.  He’s very proud of how they turned out, which he should be! 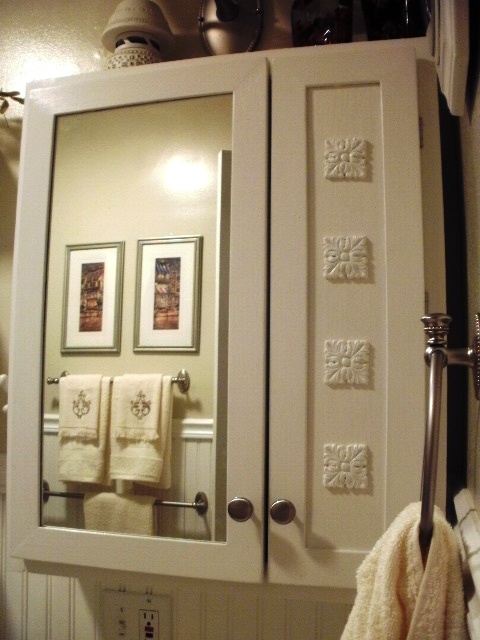 We had talked about having beadboard in the frame of the smaller door, but we didn’t have enough left over, and buying more would have been a waste. Instead, we chose the appliques together, and I think they blend nicely with the applique I added to the vanity cabinet. We also talked about antiquing the cabinet, but in the end, we decided to let the vanity cabinet be distinct in that regard and have the medicine cabinet look fresh and crisp. 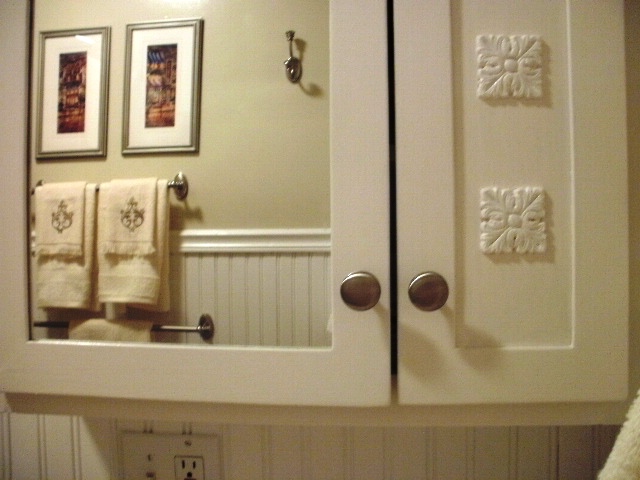 Having two doors is working beautifully. You can see how well they’re working in the following pictures. We decided to use three hinges on each door instead of two for a little added strength because the doors Jim made were longer and a bit heavier than the original doors.

See how the small door just barely hits the towel ring? That was one of Jim’s concerns, and honestly, he was right–the mirror could have easily been broken if someone had not been careful about banging it against the towel ring.

I just added the hooks for Jim’s razor this past weekend. There is a cup I want to attach to the door also to hold a daily prescription that keeps getting buried in the back of the cabinet. My hope is by having it right on the door that it won’t be forgotten as often as it has been in the past.

As you can see, the fourth shelf really added to the amount of storage we have. We’ve never seen a medicine cabinet with four shelves, and honestly, I don’t understand why someone hasn’t thought of it before.  It’s so practical. It is really amazing how much better everything is from what we had before…

Shall we take a trip down memory lane?

And let’s not forget the transformation of the old cabinet that was over the toilet that became our medicine cabinet…  Its transformation was quite stunning with a fresh coat of paint and two new, beautiful doors.

I cringe every time I look at the before pictures! It’s so hard to imagine how awful our bathroom was before now that we’ve had our nice bright one for a few weeks.  Isn’t it funny how quickly you can forget?

I just love our new bathroom. With a few modifications of my vision, it turned it out exactly how I imagined it.